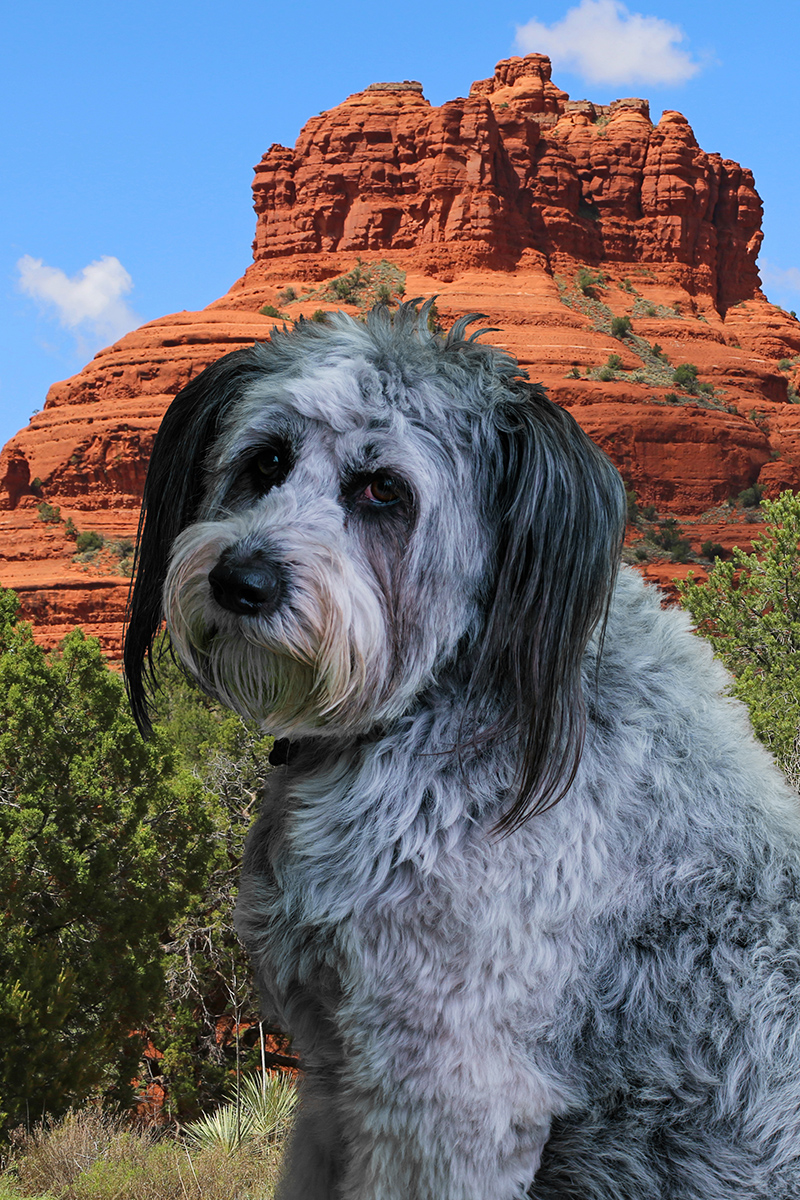 Lulu has been part of Red Mountain since day one, having come into Maureen and Josh’s lives just as Red Mountain was about to be born. Her visible handicap (she is a “tri-pawed” dog) and sweet demeanor instantly endear her to our students, especially those who have been through trauma of their own. Lulu enjoys long naps, guarding the office, and wrestling with her adopted brother Baxter. Lulu has been hopping around Red Mountain for many years now, and we hope she will for many years to come!

Lulu’s story is truly inspiring and one of the enduring legends at Red Mountain Sedona.

When Josh was about to finish his last job, as Clinical Director of a prominent Young Adult Wilderness therapist program, he was on his way to work one day when, in the middle of nowhere, he spotted a puppy sitting by the side of the road, staring at him.

Josh turned his vehicle around, recognizing this cute little being was in trouble. He approached cautiously, not wishing to be bitten by a strange dog.

However, the caution was unnecessary, as it turned out the dog was more than friendly. As he interacted with her and tenderly gave her water which she gratefully lapped up from his hand, Josh realized she had a broken leg and would not survive a long day in the heat without a way to move around. He gingerly wrapped her in a towel and she allowed him to wrap her up and put her in his car. When he texted Maureen a picture of the little being he had found, she asked, “How did you find a Muppet in the middle of nowhere?”

A couple hours later, Lulu was at Best Friends Animal Sanctuary, where she spent the next three weeks. She was treated for Parvo (puppy flu) and her shattered leg was removed when it sadly couldn’t be saved. Lulu almost didn’t make it, but she pulled through and each time Josh went to visit her, she was a little more energetic.

After three weeks of calling daily to check on her, Josh was informed by Best Friends that Lulu was ready to be adopted. However, they told him, she was not going to be put out for general adoption, because the staff at Best Friends had decided Lulu and Josh and Maureen needed to be together. So, they asked politely, when will you be coming to get your dog?

Josh sheepishly approached Maureen and asked if Lulu could come home. Maureen enthusiastically agreed, having thought all along this would be the outcome. There was one caveat, though: Josh had to take Lulu to the groomer on his way home. They named her Lulu as a shortening of “Lucky Lucy” after Josh felt her name was Lucy but Maureen and Josh’s son felt she should be named Lucky since she was in the right place at the right time.

A couple days later, Lulu entered the White family, freshly groomed and with bows in her hair, and shortly thereafter, became a constant presence during our fledgling days as a program. She has been with us every day since then as we’ve grown over the years into an industry leader, and her sweet demeanor and inspiring story have assisted many of our students on their journeys to healing and happiness.

Lulu and our commitment to her represent how we approach all of our students: We don’t give up on anyone, we will always meet people where they are and help for as long as they need it as long as they’re willing, and we always see the best in others and recognize that, no matter what you’ve been through, you can find your life purpose, just like Lulu.